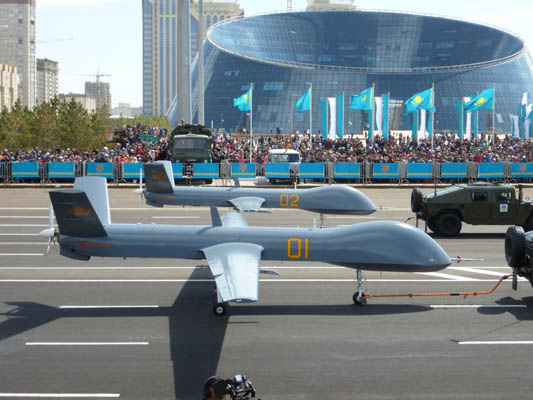 China and the Arms Trade Treaty

China’s National People’s Congress has recently agreed to join the Arms Trade Treaty (ATT) despite initial skepticism when it was first passed in 2013. Last April, the Trump administration withdrew the U.S.’s signature from the ATT and by the following September, the Chinese announced they intended to join the agreement. China claims its move to join the 104 other countries who are already signatories to the ATT is a major step in “safeguarding international and regional peace and stability.” However, China’s move to ratify the ATT has been met with some mixed reactions amongst policymakers.

The ATT is a multilateral treaty that seeks to standardize regulatory practices for the international arms trade to improve the rigor of national oversight process and minimize sales that would contribute to human rights abuses, conflict, or criminal enterprise. There are no restrictions on weapons or quantities sold, but the treaty attempts to increase accountability and transparency over the sales that do occur. In its most ideal implementation, nations would create transparent national control lists and withhold arms sales to those who violate international humanitarian law or who cannot control the end destination.

The ATT has its roots in a global push to combat the proliferation of conventional weapons that fueled vast human suffering in the decade following the end of the Cold War. Small arms and light weapons were addressed through a non-binding UN resolution in 2001 and a push to expand regulations to all conventional weapons succeeded in bringing the ATT to the UN General Assembly in 2009. The ATT was finally adopted in April of 2013.

Treaty negotiations initially met pushback from China, Russia, and the United States, with only Washington eventually signing, but not ratifying, the treaty. The United States came under criticism at the time for advocating for a resolution where states would only have to consider human rights abuses, but not be bound by it. Furthermore, the United States refused to endorse any explicit bans on transfers to non-state actors codified into the ATT, something Beijing and Moscow supported. China was also very skeptical of the use of an international treaty to regulate matters of sovereign defense, the ATT’s strict criterion for human rights law, and the guiding principles of the treaty.

Throughout the negotiating process, however, China saw the growing support for the ATT amongst its African partners and dropped its technical objections to the treaty. Ultimately, China abstained due to the failure of the treaty to pass on consensus. Instead the treaty was put through a roll-call vote that overrode the objections of North Korea, Iran, and Syria.

As the 5th largest arms exporter and a significant dealer in Africa and Asia, China’s refusal to publish specific numbers has made it hard to analyze the impact of Chinese imports. Furthermore, China’s policy of non-interference means once it has sold weapons, it avoids interfering with what the state then does with them. As a result, China’s sales to Sudan, South Sudan, Myanmar, Pakistan, Zimbabwe, and Venezuela have been criticized for enabling the proliferation of arms to regional conflicts.

If China upholds the biggest elements of the ATT, namely a more transparent national control list, established regulation, end-use monitoring, and international coordination, China’s treaty ascension has the potential to bring more transparency and reduce risky and/or potentially harmful arms sales. The human rights norms in the ATT gives a legal framework with which to criticize and punish Chinese sales that contribute to abuse while also forcing transparency of the Chinese arms industry. During negotiations in 2013, China was willing to drop its objections to implementing human rights criterion in the treaty giving some hope China may try to comply with some aspects of end-use monitoring. Those who believe China will increase compliance can find some hope in China’s ascension to nuclear nonproliferation norms. Despite providing support for the Pakistani nuclear program in the 1980’s, China changed tack as its international standing rose and its economy opened up to the outside world. In the past three decades, China has moved to bring itself into compliance with nuclear proliferation regimes such as the IAEA Additional Protocol.

China also possesses its own incentives to involve itself in the ATT beyond being a better friend of Africa that align the treaty with its national interests and benefit compliance. In Africa alone, China has over 2100 troops deployed on various UN peacekeeping operations, hundreds of billions of dollars worth of company revenues and loans in Africa, and over 1 million citizens living throughout the continent. As China’s economic presence grows around the world, especially the developing world, China has gained a new interest in ensuring these areas are not destabilized by illicit arms trafficking, particularly small arms. Proliferation of such weapons could damage investments, kill Chinese citizens, and harm China’s reputation as a peaceful partner in Africa. Furthermore, China has a vested interest in clamping down on arms smuggling to prevent guns from making their way into Xinjiang where the government has engaged in vast human rights abuses by establishing concentration camps to pre-emptively subdue any armed insurrections.

Those who are more suspicious of China’s intentions and willingness to comply likely see this as less of a genuine care for arms control, and more of a global spat between China and the U.S. Furthermore, opponents remain unconvinced anyone will truly hold China accountable even if it does break the treaty due to China’s vast coercive economic practices. Examples of China’s flouting of American nonproliferation treaties provides further skepticism on China’s intent to uphold the ATT (even though flouting international treaties is very different from ignoring American legislation).

There is also the risk that China may use its new power in the ATT and the absence of an American counterweight to undermine the human rights framework of the ATT. After all, China has been accused of maneuvering its preferred candidates to head up the UN’s special agencies through a combination of economic and political pressure. Experts fear that China’s push to control treaty regimes and international organizations could help them undermine fundamental norms of liberal democracy and human rights. The clearest example of China’s shaping of international norms is in the UN Human Rights Committee Consultative Group where China was recently appointed as one of five representatives and will have control over expert appointments. It is certain that China will use this power to block criticism of its own human rights abuses and stress the norm of non-interference in the internal affairs of sovereign nations.

There are further concerns about China’s ascension that involve U.S.-Taiwan arms sales. China’s recent treaty announcement emphasized that it only sells weapons to sovereign states, hinting at a possible intent to weaponize the ATT to bring about diplomatic pressure on American arms sales to Taiwan. This was a concern back in 2013 and given Taiwan’s persistent status as one of China’s “strategic directions”, China’s billions of dollars spent buying off Taiwanese allies, and China’s modernizing military to handle all possible Taiwan-related contingencies, the concern is not unfounded. The billions of dollars of worth of arms sales provided to Taiwan by the United States thus remains a particularly contentious element of the Sino-U.S. relationship. The emphasis of the ATT to not support arms sales that “seriously undermine peace and security or provoke… instability” provides another rhetorical angle for China to isolate Taiwanese arms imports and claim the U.S. is undermining regional security and interfering in China’s domestic affairs. Beijing will also likely claim ownership of the only real “Chinese” control list allowing it yet another legal push to clamp down on the most contentious part of the U.S.-Taiwan relationship. While it was the NRA and not Taiwan that drove the U.S. to withdraw, these concerns remain relevant given anti-Chinese political developments in Taiwan over the last eight years.

If China ultimately decides it is in its own interests to improve transparency and end-use monitoring it may also come at the cost of a subtle undermining of the human rights norms and legal challenges to Taiwan’s arms purchases. There is no easy answer to this trade off and it remains to be seen what the actual impacts of China’s ascension will have and the implications of a possible Biden presidency in the United States come November.